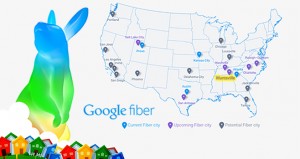 Mayor Tommy Battle announced that in 2017, Google Fiber will be bringing its ultra-fast internet service to Huntsville. Huntsville will now be the 10th city in the country with such incredible speeds–roughly 1-gigabit per second–or nearly 85 times that of the average current speed in the U.S. Google Fiber will partner with Huntsville Utilities to build a smart utility grid.

Google Fiber is bringing its speedy Internet to Huntsville, AL, for the first time forming a partnership with a city’s utility grid.

Google says a fiber network “is a long-term investment that can benefit a city for decades.”

“In 2014, Huntsville’s leaders shared their vision for a community energized by superfast speeds — and they decided to build a network that could support an electrical smart grid and other municipal needs, plus provide the best of the Web for local families, entrepreneurs, businesses and academics alike,” Jill Szuchmacher, director of Google Fiber Expansion said in a statement. “To date, we’ve built the majority of our Google Fiber networks from scratch. But over the past five years, we’ve repeatedly seen that every city is unique.”

In Provo, Utah, speedy Internet is being delivered over a network Google Fiber bought from the city. In Atlanta, Google Fiber is building its own network and using existing fiber to reach some apartment buildings. Google also operates in Austin, Texas and Kansas City and has announced plans to expand to five other cities.

Google Fiber will work with Huntsville Utilities, which is extending its fiber-optic cable network.

“Fiber to the home is the Internet infrastructure for the 21st century. It is as vital to our quality of life as roads, water, sewer and electricity,” Mayor Tommy Battle said in a written statement.

How it will work: Huntsville will design and construct the network. Then any broadband provider can bring high-speed Internet service to the city. Comcast and AT&T have both announced plans to provide fiber speeds. The goal for Huntsville: using part of the fiber network that Huntsville Utilities is building, Google Fiber will begin connecting homes and businesses next year with a complete roll out by 2020.