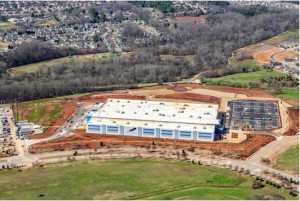 Blue Origin, the rocket company started and led by Amazon founder and CEO Jeff Bezos, opens a new rocket engine manufacturing plant in Huntsville today giving it a production facility for the future and the city a new claim on its nickname of Rocket City.

Blue Origin built the plant after winning a competition to provide the main engines for a new rocket called Vulcan Centaur that United Launch Alliance (ULA) is building in nearby Decatur, Ala..That rocket will compete for satellite launches by commercial companies and the Air Force.

By the numbers, the Blue Origin plant covers 400,000 square feet in Cummings Research Park, will employ 400 workers at peak production and represents an investment of $200 million. It will do the heavy lifting to get ULA’s Vulcan off the launch pad. The upper stage will be powered by engines made by Aerojet Rocketdyne, which is also building a new Huntsville plant.

Huntsville Mayor Tommy Battle said when the plant was announced that Blue Origin adds a critical piece to the city’s future in space. “We always knew we needed commercial space,” Battle said. “This will add to our portfolio and truly make us the center of rocket propulsion for the world. There will be a lot of Huntsville in that rocket.”

“Commercial space” is a description for the new generation of space companies such as Blue Origin and SpaceX that are competing and partnering with legacy space companies like Aerojet Rocketdyne. Blue Origin is leading a team including Lockheed Martin, Northrop Grumman and Draper Laboratory competing to build a lunar lander for America’s return to the Moon. The team’s lander is called Blue Moon.

Blue Origin said it chose Huntsville for the engine plant because of its high-tech aerospace manufacturing workforce and the presence of NASA’s Marshall Space Flight Center, nearly 300 private aerospace and defense contractors, and the University of Alabama in Huntsville, a top university for NASA research funding. The body of the rocket will be built near Cape Canaveral, Fla.

The Marshall Space Flight Center is important to Blue Origin’s plans. The center is leading NASA’s program to build the next lunar lander, and the company has an agreement to test its new engine on one of the giant Marshall stands used to test the Saturn V moon rocket’s engines. The symbolism of that link isn’t lost on anyone celebrating the new Blue Origin plant in Huntsville today.