Curbs are poured, dirt is being moved and Phase I development is underway of a new retail center — Blue at Valley Bend — on Four Mile Post in southeast Huntsville. 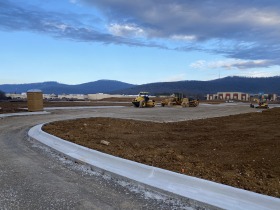 Construction underway for Blue at Valley Bend – “A little center that shies away from corporate stores.” (Photo/Alan Clemons)

Developer John D. Blue said the retail center will have approximately 30,000 square feet, with about 16,000 spoken for now. Peppered Pig, a popular local food truck, will open its first permanent location, Blue said, and be an anchor tenant.

Others secured so far include Handel’s Ice Cream “and an ultramodern, 5,000-square-foot nail salon,” Blue said. Financing for the project is provided by Bank Independent.

Blue at Valley Bend will have a patio spilling into a dog park and paths to Jones Farm Park, to the west across Aldridge Creek, via a bridge over the creek, Blue said. The Aldridge Creek Greenway access on Four Mile Post will be routed underneath the bridge. Apartments and office space are part of Phase II and III.

“We’re underway on the first phase,” Blue said. “It seems it took forever and a day, but it takes time. We ran into soil problems and then it started raining, we got the base down and curbs in, so we should be going vertically soon.

“This is a little retail center primarily for local flair, a little center that shies away from corporate stores. It’s a bit more difficult to do from the financial side to try to attract the right people. This could be second-store space for local trade industries, chiropractors, doctors … we’re trying to shy away from anything Amazon can deliver.”

Renderings of the project show slope stabilization and improvements along Aldridge Creek, which flows to Cecil Ashburn Drive. Also shown are a bike path with dedicated right-of-way, walkways, a bridge over a pond (currently is a flood retention area), event lawn, and amphitheater with ticket booths and concessions.

Jones Farm Park has 33 acres of passive recreation opportunities, with walking paths circling two large lakes. It is a popular park for walkers, runners, anglers and others.

Blue said stabilization of Aldridge Creek along with bridges connecting the park to Blue at Valley Bend and the larger Valley Bend complex would be beneficial. 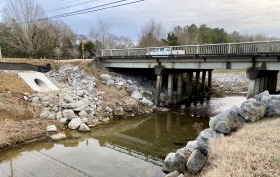 Routing the Aldridge Creek Greenway access under the bridge will be safer “because you won’t have to get on Four Mile Post.” (Photo/Alan Clemons)

“I know that Fleet Feet has some running events and getting around there can be challenging,” he said. “As for the greenway (rerouting under Four Mile Post), that’s a busy road that people have to cross to get to either the park or greenway. There’s a curb on the street, but I’ve seen some kids get ahead of their parents and that could be dangerous.

“Routing the greenway under the bridge will be safer because you won’t have to get on Four Mile Post.”

The property flyer for the project describes it as a “combination of restaurants, retail shops, professional office space, apartments, and residential condos creates an all-inclusive neighborhood that departs from the convention of other developments.

“Large open spaces highlight architectural interest and provide a park-like atmosphere enhanced by waterfalls, exquisitely landscaped gardens and the sight and sound of moving water features. The unique arrangement in which each building intersects the next with corners clipped at 45 degrees allows for wide, shaded sidewalks, large open spaces, al fresco dining and other creative uses of space.”

The project has taken time, Blue said, due to others he has been working on in the area. He said Blue at Valley Bend “is the last piece of the 100 acres we have in that shopping center.” He put this fall as a cautiously optimistic timeframe for completion.

“I guess the reason (it’s taken so long) is because we concentrated on other things,” Blue said. “I spent 10 years at the Ledges doing that and another four with Lendon (of Huntsville, a neighboring development), and that was taking most of the time.

“We’re excited to finally be moving on this.”