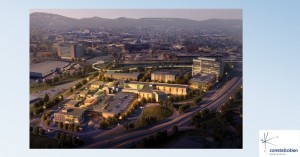 The stars have finally aligned at Constellation in downtown Huntsville.

Huntsville developer Scott McLain and partners met for a news conference this morning at the SpringHill Suites by Marriott to discuss the future of the old Heart of Huntsville Mall property on Memorial Parkway at Clinton Avenue.

The $180 million project will feature nearly 1.5 million square feet of mixed-use offerings, including apartments, hotels, retail, office, and parking decks. McLain said Constellation “might seem long in the tooth with many years of pre-development, but the tempo of the project recently changed and accelerated dramatically.”

“The change that has brought the stars into alignment at Constellation is the partnership with Equibase Capital Group, LLC, of Chicago,” he said. “As co-developer with Equibase, I can easily say that there may not be a finer partnership for a mixed-use development.”

Here is a breakdown of what to expect at Constellation:

McLain said the residential component will be attractive to millennials and others throughout the community.

“In this community, we understand the need for downtown residential dwellings, and we also understand the impact of housing on generating demand for retail,” he said. “The city recently confirmed the downtown condition with a study that says that once all the apartments that are on the drawing board are complete in downtown, we still need an additional 600 units. People want to live downtown.”

He was referring to a 2016 study commissioned by Downtown Huntsville Inc. that said downtown Huntsville needs an additional 500-600 apartment units by 2020 or it may miss a critical opportunity to achieve the live/work/play environment it desires.

McLain said the residential design will be more modern, sleeker, and interesting than what has been built across the region in recent years.

“I think that all will be impressed with the quality and style of Constellation apartments,” he said.

Hospitality: A second hotel will join the existing SpringHill Suites by Marriott. McLain said both properties are owned by Yedla Management, the company also developing the AC by Marriott at CityCentre at Big Spring in downtown Huntsville.

“The second hotel will be of similar size as the SpringHill Suites, and the flag for that hotel will be announced right before construction starts, by Yedla Management,” he said. “We anticipate the new hotel construction coinciding with the start of construction at Constellation.”

Retail: Constellation will offer nearly 72,000 square feet of retail. McLain, who is working to secure new concepts at Constellation, said tenants will decide when they want to announce their involvement with the project.

“We too are anxious for those announcements and we will share them as soon as we are able,” he said. “With the demand we have for restaurants at Constellation, we do promise to curate a selection of exciting eateries and places that will delight the senses and palate, and also be exciting. Downtown deserves no less.”

McLain said Constellation will focus more on restaurants, entertainment, downtown services and “places of social engagement” instead of clothing or soft goods retail. There are currently 17 active discussions with new-to-Huntsville restaurants and retailers for Constellation.

“If you need to buy a suit or shoes, we think you will enjoy other offerings in Madison County,” McLain said. “If you want to have a good time, though, we think downtown and Constellation will be the place to be.”

Office: To address changing office needs, McLain said Constellation will provide two office buildings: a smaller 67,000-square-foot facility and a larger 280,000-square-foot space that may be “the tallest office building in town.” He said interest is high in the office developments, and they are currently involved in 14 discussions with potential users and tenants.

“These office users recognize that Constellation will be a millennial magnet, offering many of the amenities and features that young workers want,” he said. “We all know that the average age of our office and Redstone Arsenal workers is at or near retirement age, so attracting millennial workers is an important problem that Constellation is anxious to address. We expect the office space to lease briskly.”

Constellation is expected to create about 2,000 new jobs and an annual tax impact of more than $8.8 million, according to a recent economic impact study by the Huntsville/Madison County Chamber. McLain said the city is not providing financial incentives, but he has not ruled out possible infrastructure assistance for the parking portion of the development.

The news conference was the first public event about Constellation since McLain announced the project three years ago. A nationwide recession and the death of McLain’s former business partner, Dr. Manu Patel, have hindered progress of the development, which dates back to 2000.

McLain said mixed-use developments are among the hardest to execute.

“I could’ve done something with this property within six months by putting a big-box on it or a car dealership but nobody would be happy with that, so what we’ve done is this mixed-use complicated project,” he said.

Grogan, who is responsible for asset, development and construction management activities for Equibase, said they have been working every day for 14 months on Constellation, which should break ground this fall with the first tenants opening 18-20 months from the start of construction.

Equibase has invested a significant amount of money into the project.

“We are fully committed emotionally; I love this property,” Grogan said. “Financially, we’ve invested a lot, and we’re anxious to start. I know there’s been a lot of delays and stop-and-go but you’ve got to take 2006-2013 and just strike those years because nothing happened. We’re very, very excited to be part of this.”