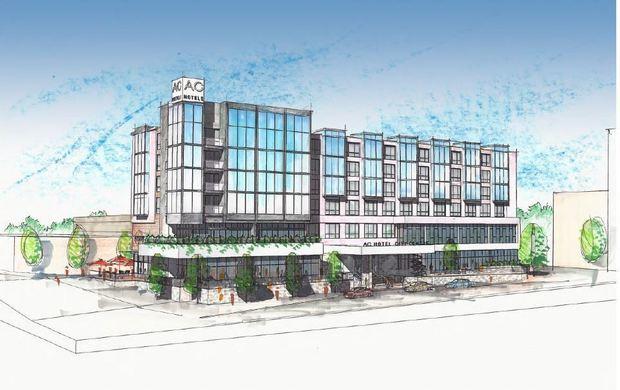 A rendering of AC Hotels by Marriott at CityCentre at Big Spring. (Courtesy photo)

A formal groundbreaking for a long-awaited development project in downtown Huntsville has been set for next week, perhaps signaling a move forward in efforts to re-shape a high-profile spot near the Von Braun Center.

The groundbreaking ceremony at CityCentre, to be located on the site of the now-demolished Holiday Inn on Williams Avenue at Monroe Street, will take place Jan. 10 at 2 p.m.

Developer RCP Companies said the event will mark the beginning of work on Phase 1, which will include a six-story, 150-unit first-in-Alabama AC Marriott hotel. BL Harbert International will lead construction on the hotel.

The project is planned to bolster Huntsville’s burgeoning downtown, though it has come together a bit slower than first expected.

When the project – initially tabbed Big Spring Square — was first announced in 2014, groundbreaking was planned for April 2015.

A revised timeline in 2015 projected construction to begin in March 2016.

According to RCP Director Odie Fakhouri, Phase 1 will be now completed by the spring of 2018.

It replaces anticipation with action for the site that’s been vacant since the Holiday Inn was razed almost two years ago and the site was fenced off with a curtain promising the coming CityCentre.

The mixed-use project “will become iconic additions to Huntsville’s skyline,” Fakhouri said in the announcement, “and the spaces in between the buildings will afford opportunities for patrons to encounter vibrant community through great food, music, art and local culture.”

More details will be announced at the groundbreaking, which Fakhouri said will include another first-to-Alabama concept to be a part of Phase 1.