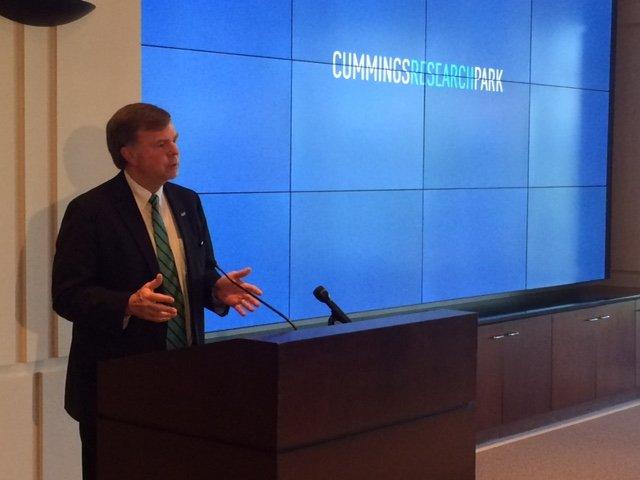 Cummings Research Park will look very different under guidelines listed in a new master plan presented today by the Chamber of Commerce in Huntsville.

Nearly nine months after hiring architecture and design firm Perkins+Will (P+W) to lead the master planning process, the Chamber unveiled a new blueprint for CRP, the second-largest research park in the U.S. and fourth-largest in the world.

P+W provides an image of a proposed mixed-use node in CRP. (Courtesy photo)

Erin Koshut, who was hired last summer as the director of CRP, said companies are looking for more than a suburban office park. To continue thriving in the future, she said CRP must become a vibrant urban center of gravity for high-tech research and development in the north Alabama region.

The new master plan, the first for CRP in four decades, seeks to do just that.

“It really does transform the park and it’s based on market needs,” Koshut said. “It’s based on what companies are looking for and to create vibrancy within our park. We’ve done some really phenomenal things in this park, and we’ve got a really great heritage and strong companies and fantastic people, and now what we do is look at the next 50 years and evolve and change the park in a way that supports that.”

P+W Senior Project Designer Jeff Williams said the park must support the entire life cycle of growth for companies in Huntsville, from the idea and incubation phases to commercialization and stability. One idea includes a new startup village where entrepreneurs can gather to discuss ideas and grow their businesses in a space that is both affordable and nimble enough to meet their needs.

The master plan said the old Chrysler building near Calhoun Community College’s new campus could be transformed into a “catalytic Maker-Hacker Village with facilities, equipment and programs to incubate creativity around cyber-physical endeavors, fabrication and prototyping.”

“In these places, there’s actually a tremendous amount of opportunity and for us that opportunity is around creating a place for startup businesses,” Williams said.

Changes could also include two mixed-use nodes at the corner of Bradford and Wynn drives and at the far northwest corner of Technology Drive adjacent to Madison Square Mall, which was bought by The Grove Huntsville in 2014 for $5 million. Developer RCP Companies plans to redevelop the struggling shopping center in the future.

The proposed nodes would operate in the Scale-Up District and feature business and lifestyle services, cafes and restaurants, and some housing to support the primary science and technology business focus within CRP. Williams said they would also support the lifestyles of the workers Huntsville is trying to attract.

P+W also calls for growth on undeveloped parcels at the western edge of CRP.

“Multi-tenancy of buildings is allowable but restricted within the (Commercial) District and a network of parks, trails activate the landscape and a small mixed-use node is proposed near Bridge Street Town Centre,” the plan said.

To read the full master plan and see the park’s new branding and website, visit hsvchamber.org/crp.html.

Huntsville Mayor Tommy Battle said the city may pay for the master plan by adopting a TIF (Tax Increment Financing) overlay, allowing increases in property taxes to fund improvements inside the park. A business association or district where members pitch in on the cost of improvements is also an option.

“A lot of those things are being looked at right now as ways that we can continue to fund all of the improvements that we see in the park,” Battle said.

Koshut said they will meet with CRP stakeholders this summer to get their feedback on the plan and allow them to ask questions. In late August or early September, CRP will make any necessary changes to the plan before it is presented for final approval to the CRP board, Huntsville Planning Commission and Huntsville City Council.

Koshut said they didn’t allow budgetary restrictions to drive the formation of the master plan, which will require some new zoning guidelines inside the park.

“We wanted to let the market and what was needed drive the new recommended master plan, and then we would determine the funding necessary to support that,” she said.

CRP has more than 300 companies and 29,000 employees. Officials hope an updated master plan will bring CRP into the future, produce jobs, attract and retain businesses and lure young professionals to the area.